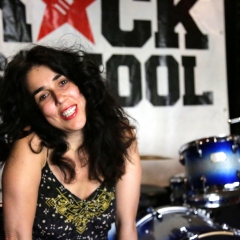 Tsvetelina has sung with most of the Bulgarian jazz musicians and groups, such as Mihail Yosifov, Angel Zaberski - son, Velislav Stoyanov, Veselin Veselinov - Eco, Kalin Velov, Plamen Petrov, "Akaga", "Brazz Vili DJ", Rubik's Cube. She has sung on many stages in Bulgaria and Europe and has participated in the festivals: Apollonia Art Festival 2005 and 2010, Park Life Fest 2009, Burgas Blues Festival, Sunday Art Report, Nepal Jazz Fest, Brazzobrazie 2012, Soley 2012, Elevation 2012, Sofia Pride 2012, Spirit of Burgas 2012, In the Center 2013, Francofolies 2015. In the last five years, he has been building an independent musical career, and the songs are "Our Dance", "I Don't Know What", "Missis Wizard", "Un, Deux, Trois". ”,“ Tup tup song ”,“ May song ”reach the top places in the Bulgarian music charts.

SINCE WHEN HAVE YOU BEEN INTO MUSIC AND HOW DID YOU DECIDE TO START?
23 years ago, my relative Chavdar Chendov, the founder of Rhythm magazine, told my father that there was a new jazz singing department at NBU, so I applied and was accepted into Angel Zaberski's class. I have been happy with music for 23 years.

WHICH SONG DO YOU REMEMBER MOST OF YOUR CHILDHOOD?
The song I remember from my childhood is not one, but one of them is "It's flowing, everything's flowing."

WHO ARE THE ARTISTS YOU HAVE LISTENED TO AND PLAYED THE MOST?
I love and listen to jazz, funk, soul, pop, country and classical music, also hip-hop and there is no one I have listened to the most, but Ella Fitzgerald, Nina Simone, Billy Holiday, Amy Winehouse, Beyonce, Leonard Cohen, Marvin Gay, Johnny Mitchell, Aretha Franklin, Johnny Cash, Emily Sante, Liane la Havas I listen to very often.

IN WHICH MUSICAL STYLE ARE YOU MOST ADVANCED?
Popimprovizovjazov

WHAT DOES MUSIC GIVE YOU?
Music gives me meaning and calmness and emotions, as well as happiness and thought.

WHY DID YOU DECIDE TO START TEACHING MUSIC?
Because I felt I had the talent to pass on what I knew to others and because it's very interesting and I think I'm helping a lot of people. This is very important to me.

WHAT IS THE MOST IMPORTANT THING TO LEARN IN MUSIC?
There is hardly one most important thing, but in my opinion, one of the most important is to work hard, to be constant and to look for who you are in music. Your handwriting.

WHAT IS ROCKSCHOOL FOR YOU?
RockSchool is my other family. At the end of my last lesson for 2018, I cried when I left, because I realized how important and real what we do in our school is.

WHICH MUSIC IS VALUABLE TO YOU?
Music is a collection of knowledge, experience, and feelings. Sincere music that a person feels and has learned to perform with ease.

WHAT IS THE MOST EXTRAVAGANT THING YOU HAVE LISTENED LATELY?
Moon Hooch's new jazz band from New York. Saxophone and drums. They're just a whirlwind.

DO YOU HAVE A DREAM RELATED TO MUSIC?
I have a great dream to do the author's concerts in bigger halls, with wonderful musicians and I would be very happy if we do something really valuable and world-class in this direction with one of the teachers. Everyone to convey their invaluable style and so to enrich ourselves and the music and the audience.