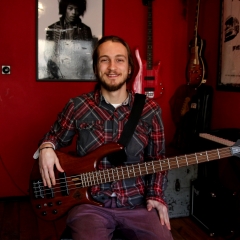 After a year of diligent training, in 2012, Daniele was admitted to the Saint Louis College Of Music (Rome, Italy), where he studied for three years and expanded his musical horizons.

My first band and I played Groove Metal, but when I went to Italy, I decided to enroll in a jazz bass course. This drastically changed my approach to music and helped me discover new horizons. I became interested in different and varied styles.

During the years spent in Italy, I played in over 15 bands, where I experimented with jazz. Since I have been in Sofia, I have played in various ensembles as a guest musician. I recently had the opportunity to work with Argentine artist Lucas Masciano.

WHEN HAVE YOU BEEN INTO MUSIC AND HOW DID YOU DECIDE TO START?

I started as an amateur, on the idea of ​​a classmate at school - they formed a band and did not have a bassist.

WHICH SONG DO YOU REMEMBER MOST OF YOUR CHILDHOOD?

WHO ARE THE ARTISTS YOU HAVE LISTENED TO AND PLAYED THE MOST?

I accompany mainly jazz melodies. Accordingly, I mostly listened to their composers and the artists around them, but I went through a lot.

IN WHICH MUSICAL STYLE ARE YOU MOST ADVANCED?

I have the most experience in jazz.

WHAT DOES MUSIC GIVE YOU?

Meaning (and not a little frustration).

WHY DID YOU DECIDE TO START TEACHING MUSIC?

I like to meet and communicate with new people and what I have learned - to pass on.

WHAT IS THE MOST IMPORTANT THING TO LEARN IN MUSIC?

It takes a lot of work and perseverance - as for most meaningful things in life.

WHAT IS ROCKSCHOOL FOR YOU?

A place where people with an interest in music gather and exchange experiences - on an amateur and professional level.

WHICH MUSIC IS VALUABLE TO YOU?

Music that can touch you, evoke emotions and in which you can "sink into timelessness" while experiencing it.

WHAT IS THE MOST EXTRAVAGANT THING YOU HAVE LISTENED LATELY?

DO YOU HAVE A DREAM RELATED TO MUSIC?