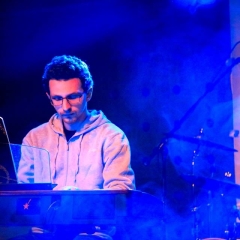 In 2007 he graduated with full honors from NMU "L. Pipkov" in Sofia. In the same year he continued his studies at the NMA "P. Vladigerov ”. He studied successively in the piano classes of Acad. Atanas Kurtev and Prof. Ivan Drenikov.

WHEN HAVE YOU BEEN INTO MUSIC AND HOW DID YOU DECIDE TO START?
From the age of 6, my parents referred me. They both have bright musical interests without being professional musicians. When I graduated from NMU "L. Pipkov ”in Sofia, I was faced with a new choice - to dedicate myself to my studies as a composer or to continue to develop as a pianist. I recorded a piano at the NMA "P. Vladigerov ”, because the contact with the audience is of paramount importance for me and without the joint experience of music during concerts, I would lose a part of myself.

WHICH SONG DO YOU REMEMBER MOST OF YOUR CHILDHOOD?
"Space Truckin '" by Deep Purple, with broken guitars and a burning scene, "The end" by The Doors, because of the films of Oliver Stone and Francis Ford Coppola. On the other hand, Beethoven's Appassionata and Stravinsky's Spring Sacrament.

WHO ARE THE ARTISTS YOU HAVE LISTENED TO AND PLAYED THE MOST?
Bach, Chopin, Debussy, Vladigerov, there are many. From the age of 8, I started participating in various piano competitions dedicated to classical music - as a solo artist, as well as with his own works. And I have the pleasure of being a frequent winner. Later, I became interested in and played the music of Bill Evans, Oscar Peterson and other jazz giants. I listen to a lot of movie music. I am interested in authors such as John Williams and Clint Mansell. And sometimes I choose Palestrina or Beth Hart.

IN WHICH MUSICAL STYLE ARE YOU MOST ADVANCED?
I have studied in depth the classical repertoire from the Baroque era to the 20th century. In recent years, I feel more and more confident when I play jazz or blues, as well as in rock music, although in this case the piano is less common and has a different role.

WHAT DOES MUSIC GIVE YOU?
Almost everything - from "premonitions of sublimity", to sadness and aggression. But never boredom.

WHY DID YOU DECIDE TO START TEACHING MUSIC?
It just happened and I continued on this path without hesitation. Sharing experience, I think I share the best of myself.

WHAT IS THE MOST IMPORTANT THING TO LEARN IN MUSIC?
I am constantly learning new things, experimenting with my playing, as well as from contact with fellow musicians. Each of these discoveries seems to me to be the most important until I come across the next "insight." I don't know if these are the most valuable lessons, but in my opinion, music is a controlled and highly conscious experience of time - not only as a philosophical concept but also as a specific psychophysiological phenomenon. The responsibility to develop as a musician falls entirely on your shoulders. Music could not serve as an instrument of personal ego and narcissism. You stand in front of the audience to communicate with them, not because you are special, but only because the music that sounds is special and you all share these moments together.

WHAT IS ROCKSCHOOL FOR YOU?
The freedom to develop as a musician, without limiting myself to traditional approaches to making music together. The hectic preparation of students when they are about to take the stage or an academic exam and the responsibility I take on their performance. Contact with interesting and colorful people from different backgrounds, each of whom influences and changes my perception of the world. But above all, the excitement of the beginner who reaches for a musical instrument for the first time, regardless of age and the joy of music, through which he discovers an intimate and creative side of himself.

WHICH MUSIC IS VALUABLE TO YOU?
The music is valuable, in which I manage to feel the devotion and the casual joy of the author, to feel the moment when the ideas took shape in front of his eyes. The specific style or composer, era or even geographical and civilizational context are irrelevant.

WHAT IS THE MOST EXTRAVAGANT THING YOU HAVE LISTENED LATELY?
"Ave maris stella" by Guillaume Dufay, a three-part 15-century foburdon, followed by several pieces by Gojira.

DO YOU HAVE A DREAM RELATED TO MUSIC?
My dream is to see many of my students succeed and realized as musicians who will actively participate in the musical life of Bulgaria, to transform it and to grow on the international stage.