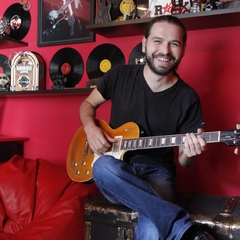 In Kiril's school years, after his father had given him his first guitar, the boy formed his first band called "Soul Art" which has played in most of the local rock bars and on school festivals. From this age Kiril knows, that he wants to make a living with playing the guitar.

Kiril earned a bachelor’s degree in pop and jazz guitar from the National Academy of Music “Pancho Vladigerov” in 2008. Kiril now has 8 years of teaching experience.

How long have you been involved in music and how did you decide to start?

I have been involved in music since I was 9 years old, and in the beginning, I practiced my brother's accordion. One day my father, who in his youth played the guitar and several other stringed instruments quite actively, after a trip to Sofia, brought something wooden with six strings stretched. The idea was to get his old skills back, but ... what is this? GUITAR?! I was the proud 10. I took the guitar and I haven't played it since.

Which song do you remember most vividly from your childhood?

The Shadows - Apache (I was very impressed by the sound of Hank Marvin's red stratum). At the beginning of 5th grade, for some reason, I was in the hospital, and in order to have something to waste my time, a neighbor, a veterinarian with decent musical skills, had given me his old walkman and a few tapes of various things, between which and the instrumental in question. When I first heard it, I couldn't believe that the guitar could sound that way ...

Who are the artists you have listened to and played the most?

It's hard to say which artists I've listened to and played the most. I love the variety and I've listened to different things at different times. My playing style is inspired by guitarists like Jimi Hendrix, B.B. King, Stevie Ray Vaughan, Eric Clapton, Mark Knopfler, Ritchie Blackmore, Jimmy Page, Gary Moore, Joe Satriani.

In which musical style are you most advanced?

I can't name the one I'm the most advanced at. I don't define myself that way, and I think that if a musician builds a good technique on the instrument, he can handle a great variety of styles. Over the years I have learned many styles of music and I try to be good at what I do.

What does music give you?

Music makes me feel alive and overcome difficulties. It gives me hope that the world is a good place to live.

Why did you decide to start teaching music?

My first student appeared in 2007, I had not yet graduated from the Conservatory. It happened spontaneously. One student, second, third ... It has always been a pleasure for me to make people feel good. This is a two-way process. During these years I have learned a lot myself.

What is the most important thing to learn in music?

There is no one most important thing to learn to express yourself through music. Desire, talent, perseverance ... as long as you take some time regularly, you will get a good result. It all depends on your attitude and how much you are willing to give of yourself. As for talent, this is a separate topic ...

What is RockSchool for you?

I will express myself in the words of a student of the proud eight years: "It is very nice to come to this club!"

Which music is valuable to you?

Valuable music? A long and broad topic. Everyone knows about themselves. I believe that whatever makes you feel good, as long as you don't force it on others and there are no casualties, is OK. After all, we are talking about music - to have emotion, harmony, suggestion. The message is something specific, it can be felt and understood differently, but it must be there. Value music works without a translator, without a mediator, it connects feelings, states, moods. It's important to be music, not cacophony.

I don't know what extravagance means for music. Going beyond the known in some scandalous way is the only goal to be noticed easily and quickly? No thanks. It is enough to be original :) Let the valuable be evaluated, not the pretentious.

Do you have a dream related to music?

I want music to spread among people and make them feel good. Make Music, not War!