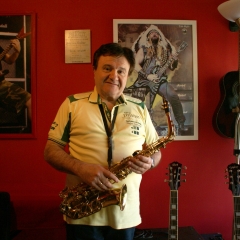 He graduated from the State Academy of Music in Sofia, majoring in saxophone and flute. He has a Master's degree in Pop and Jazz Music.

He has worked with various concert groups in the country and abroad, as well as in smaller formations in various hotels, restaurants and nightclubs. He has participated in television shows and studio recordings for the Bulgarian National Radio.

How long have you been involved in music and how did you decide to start?
At the age of 7, I could not make an independent decision, but I was directed by my parents.

Which song do you remember most vividly from your childhood?
I don't remember singing songs at that time, but when I was 10 I played a lot of people and accordion handkerchiefs.

Who are the artists you have listened to and played the most?
Undoubtedly, these are the famous jazz saxophonists Johnny Hodges, Stan Gates, Cannonball Ederley, Benny Carter and others.

In which musical style are you most advanced?
I graduated from the conservatory with jazz and pop music, but I also do well with folklore, fun and dance, etc.

What does music give you?
For me, music is both a profession, a hobby and a way of life.

Why did you decide to start teaching music?
This gives me the opportunity to pass on my experience and knowledge to the younger ones.

What is the most important thing to learn in music?
Everyone to learn to convey thoughts and feelings through music and to receive emotions from it.

What is RockSchool for you?
Good idea - a center for music culture, performances and training.

Which music is valuable to you?
Every music with a beautiful melody, rich harmony, appropriate rhythm, professionally arranged and performed is valuable for me.

Do you have a dream related to music?
Yes, I dream of a society oriented towards value music, free from the phenomenon of "pop-folk", "chalga", etc.