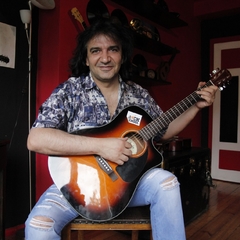 After a while Plamen realized that improvisation is the most important part in all sorts of music and he encourages his students to play their own style and music.

Plamen earned a master’s degree in pop and jazz guitar from the National Academy of Music “ Pancho Vladigerov”. Jazz music is his passion but when he playes he uses various elements from all kinds of genres.

Plamen has played with many jazz and rock formations in Bulgaria, Honk Kong, Norway, Netherlands, and Estonia. He has participated in the Latino formation “Los Torros”, the opera “Jesus Christ – Superstar ”, the TV show “Jazz Time” and others. In 2001 Plamen formed “Plamen Petrov Trio”.

Plamen is author of over 300 compositions and over 20 collection books with a vast variety of genres for classical and acoustic guitar, solo guitar plays, duets, trios, as weel as jazz pieces. They are published in Germany, Denmark, and Bulgaria

How long have you been involved in music and how did you decide to start?
Somewhere around 12 years old. I felt attracted to the instrument itself.

Which song do you remember most vividly from your childhood?
Child In Time.

Who are the artists you have listened to and played the most?
Joe Pass.

What does music give you?
Sense of meaning.

Why did you decide to start teaching music?
To be useful.

What is RockSchool for you?
A place where I am myself.

Which music is valuable to you?
Time decides.

Do you have a dream related to music?
Everyone wants to leave a mark.