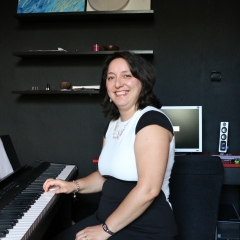 Stanislava Vazharova graduated classical singing at the Music Academy "P. Vladigerov ", Sofia and received a master's degree in opera singing from the Guildhall School of Music and Drama, London, where she received a full scholarship. Stanislava focused her dissertation on Visual artistic stimuli in the composition and performance. In 2004-2005, she studied at the prestigious Kidzana Academy in Siena, Italy, with opera singer Raina Kabaivanska, where she received an Emma Contestible Emmy. Stanislava was awarded the first prize at the international contest "Emmy Desert" 2004 London and was the finalist of Susan Longfield and Villar Young Artist in Covent Garden, London.

Stanislava has had recitals at Saint John Smith's Square in London, Osaka Grand Hall and Suntory Hall (Japan), National Palace of Culture and Bulgaria Hall at Sofia Musical Weeks and so on. In 2003, Stanislava presented a series of Italian recitals in Beirut on the occasion of the Euro-Arab conference. In 2012 she and pianist Christopher Pitas recorded a CD for the Bulgarian National Radio.

Stanislava has been teaching for 13 years and hundreds of students, children and adults have passed through her hands. It uses a system to help the student free his voice and gain vocal confidence and self-confidence as a performer. She trained as a Vocal Nosh and Brain gym system pedagogue. She has taught in the prestigious Ethniko Odio, Athens, Greece and often traveled to London to teach and teach master classes at First Musical Academy. In 2008, Stanislava was invited to run a series of opera workshops for the Glow Theater, which ended with opera performances. Recently, Stanislava was invited to run a series of singing seminars for children and adults at Casa Del Teatro in Thessaloniki, Greece.

WHEN HAVE YOU BEEN INTO MUSIC AND HOW DID YOU DECIDE TO START?
I started singing when I was about 6 years old. We went on excursions in the mountains with the world-famous violinist Prof. Vladimir Avramov and we always sang along the way. Once Prof. Avramov heard me singing and offered my mother to enroll me in the Children's Radio Choir because he said that I had a "very nice voice". That's what happened, I auditioned for DRH and soon I became a soloist and we toured all over the world - Japan, Mexico, Finland. Singing and rehearsals were a break for me.

WHICH SONG DO YOU REMEMBER MOST OF YOUR CHILDHOOD?
Maybe the song I applied to DRH with: "You're beautiful, my forest". I still remember my first “singing lesson” with my grandmother telling me, “Relax your voice!” That helped me.

WHO ARE THE ARTISTS YOU LISTENED TO AND SING THE MOST?
Maria Callas, definitely. A singer should be able to sing in different styles and in different languages. I sang in German, French, Italian, English, Russian, Japanese, Spanish, Finnish and even Norwegian! Every song that you learn well and sing on stage becomes a favorite, this is the creative process.

IN WHICH MUSICAL STYLE ARE YOU MOST ADVANCED?
I am best acquainted with classical singing and music, but if you acquire the technique of classical singing, you will have a very large range and you can sing in any style. I love jazz very much, it's intelligent music, I have experience in both musicals and pop. I encourage my students to be able to sing in different styles, but most importantly, to sing from the heart and with proper sound extraction.

WHAT DOES MUSIC GIVE YOU?
Music is like breathing for me in the sense that it comes from inside me. But it's not just because of talent, but also because of the 35 years I've been working with her. Music has the amazing ability to open and touch a person. There are studies showing that the musician's mind is comprehensively developed. Music also has a therapeutic effect.

WHY DID YOU DECIDE TO START TEACHING MUSIC?
Because I had a great singing teacher in London when I was doing my master's degree at the Guildhall School of Music and Drama, who used amazing voice unleashing techniques, she managed to achieve it with me and now I want to pass on what I know and can to my students. It is very satisfying when students are able to apply what you are trying to show them and make progress. A good teacher must be a good performer, but also the right person and character and love his students. My favorite areas of teaching are group lessons and singing workshops. There are endless opportunities for creativity and inspiration!

WHAT IS THE MOST IMPORTANT THING TO LEARN IN MUSIC?
To find a good teacher and trust him, as well as to rehearse at home so that what you have learned becomes yours. To be a good musician, you have to learn a lot, to be versatile: to have knowledge of theory, developed hearing and knowledge of musical works. I also support the use of cross-art techniques, such as Visual Artistic Incentives in performance and composition. I have students who are involved in acting and that helps them a lot in performing the songs.

WHAT IS ROCKSCHOOL FOR YOU?
RockSchool is a center for creativity, with a very pleasant and encouraging atmosphere that helps everyone feel in their place and study music, as well as expand their musical horizons with courses, workshops and concerts.

WHICH MUSIC IS VALUABLE TO YOU?
For me, valuable music is that which is performed sincerely and without pretense. A musician must have the ability to choose the music to perform according to his beliefs, what he wants to suggest, and so on.

WHAT IS THE MOST EXTRAVAGANT THING YOU HAVE RECENTLY LISTENED LATELY?
The most extravagant thing I've ever performed is a children's song that my husband and I composed recently. It's good to try new ventures. It was very nice and interesting, I learned something new.

DO YOU HAVE A DREAM RELATED TO MUSIC?
I would like to improve and reform music education in Bulgaria, to help introduce more modern teaching methods that give the student an active place and unleash his talent. A good education in the field of music can help a person grow, liberate and have more realization and self-confidence in general. 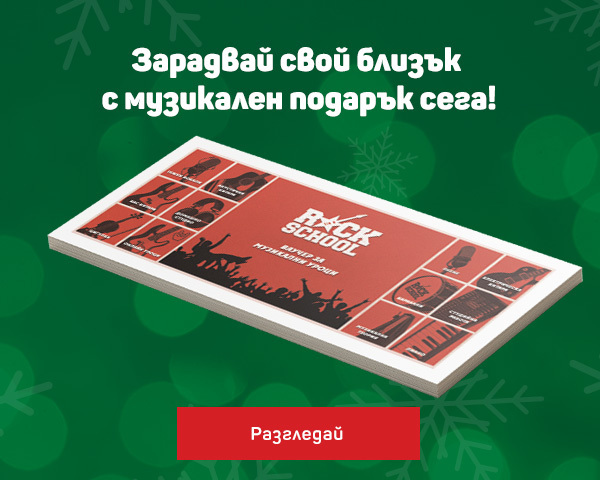