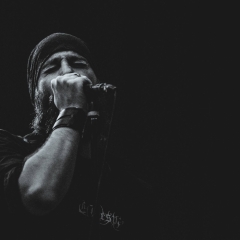 In 2003, together with his best friend forms a band, called Dimholt, where he takes the vocal parts. The band is still active now. In 2011 he joins the death metal clan Impenitence. He is striving to keep up a high concert activity with both bands.

SINCE WHEN HAVE YOU BEEN INTO MUSIC AND HOW DID YOU DECIDE TO START?
I deal with music from a very happy coincidence. In elementary school, I came across an art class with an additional choreography profile. I started dancing folk dances, I enrolled in an extracurricular group, we started learning to sing while dancing. That's how I got passionate about singing. My passion for music was ignited by my older brother - he lit me on metal. The day you brought Paradise Lost's "Icon" home, I can say, has become a turning point for me!

WHICH SONG DO YOU REMEMBER MOST FROM YOUR CHILDHOOD?
I remember a lot of songs, especially from my childhood, because every day I discovered so beautiful and at the same time all-encompassing for me songs, bands, styles in rock, metal. Perhaps I remember Pink Floyd's "The Division Bell" the most - my mother loved this album and often listened to it when I was a kid, that's why I remember it so strongly. Also "Death Or Glory" - an album of the German heavy metal legends Running Wild, because this was the first cassette they gave me, and also because the album itself is phenomenal. If I have to say a song - "True Belief" by Paradise Lost.

WHO ARE THE ARTISTS YOU HAVE LISTENED TO AND PLAYED THE MOST?
If I start listing the artists I've listened to, I won't have enough time. Here are just a few - Anathema, Burzum, Lantlos, Katatonia, Paradise Lost, My Dying Bride, Rafael Anton Irisarri and many more. As for playing, I would rather say the music of my two bands - Dimholt and Impenitence, although with Impenitence we allow ourselves to desecrate artists such as Behemoth, Morbid Angel, Nile, Cannibal Corpse and others.

IN WHICH MUSICAL STYLE ARE YOU MOST ADVANCED?
Black / death / doom metal.

WHAT DOES MUSIC GIVE YOU?
It's trivial, but EVERYTHING! I can't imagine life without music - a source, a provocateur, a breeding ground for emotions. I like to listen to an infinite number of things, to provoke my emotions. Music is a drug and I am very addicted.

WHY DID YOU DECIDE TO START TEACHING MUSIC?
When I started doing heavy music, there was no one to give us guidance, not the way things were at RockSchool. I decided that I could be useful with tips, practices from my experience to help students. I like working with my students, seeing their desire and passion.

WHAT IS THE MOST IMPORTANT THING TO LEARN IN MUSIC?
Persistence, perseverance and the desire to (self) improve.

WHAT IS ROCKSCHOOL FOR YOU?
A place where I found new friends. A place where I have fun. A place that met me with people who will have my respect forever, because of their work, dedication and endless motivation to develop.

WHICH MUSIC IS VALUABLE TO YOU?
Music that expresses you. Music that provokes you and touches you at the same time. Sometimes it's hard to explain in simple words, but sometimes it's just obvious - I don't like songs, albums, artists who create just to have them. Music must have a soul. I will give a simple example - Pink Floyd, there is just everything and if you really love music, you can not be indifferent to each of their notes! If you listen to something and remain expressionless to it, then it just isn't worth it. At least for me.

WHAT IS THE MOST EXTRAVAGANT THING YOU HAVE LISTENED LATELY?
I don't know about the extravagant, but I will give an example of a contemporary artist who with different techniques has made a wonderful metal album, complex to put in a style frame: Thy Catafalque - Geometria

DO YOU HAVE A DREAM RELATED TO MUSIC?
In the interest of truth, I am living my dream - I am part of two wonderful groups with which we have experienced many good moments. The feeling of holding the CDs with our albums, knowing that I have left a large part of myself in the releases, really fills me with pride. Thanks to my dream of making music, I met many people who I am happy to call friends today. And also the realization of this dream brought me to RockSchool.