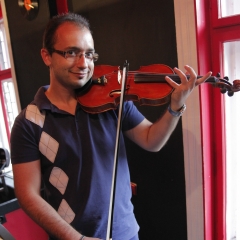 Miro took his first violin lessons at the age of 5 with Krassimira Odzhakova, a graduate of one of the founders of the Bulgarian violin school - Professor Petar Hristoskov. Under her leadership, he graduated from the National School of Arts "Dobri Hristov" -town. Varna. Later he graduated from the National Music Academy "Pancho Vladigerov" in the class of Prof. Elisaveta Kazakova (G. Badev, P. Hristoskov). He learned a lot from her, both about playing the violin and about teaching and approaching students.

Miro has participated in concerts as a soloist in the "Branch" hall, hall 1 of the FCC, Art Gallery, as well as part of the orchestra of the Varna Children's and Youth Opera. At the age of 9 he won the second prize at the national competition for instrumentalists and singers "Svetoslav Obretenov" - Provadia.

Since 2008 Miro is part of the Sofia Symphony Orchestra. Outside its concert poster, the orchestra promotes classical music through educational concerts for children and adults. With the Sofia Symphony they visited the largest halls in Europe. Among them are Victoria Hall - Geneva, Tonhalle - Zurich, Musikverein - Vienna (Golden Hall of Music), Concertgebouw - Amsterdam, Auditorio Nacional de Musica - Madrid, Palau de La Musica - Barcelona and many others.

SINCE WHEN HAVE YOU BEEN INTO MUSIC AND HOW DID YOU DECIDE TO START?
My parents decided. I was enrolled in group recordings when I was 4 years old. From 5 I was enrolled in violin and solfeggio lessons. This was followed by the State Music School, the Dobri Hristov National Music School in Varna and the Pancho Vladigerov National Music Academy in Sofia.

WHICH SONG DO YOU REMEMBER MOST OF YOUR CHILDHOOD?
I have specific memories with "Sharo and the first snow" and "I am a sun" :) At the moment I remember them, singing them to my little son.

WHO ARE THE ARTISTS YOU HAVE LISTENED TO AND PLAYED THE MOST?
At most, as a child, I listened to two cassettes. One was Nigel Kennedy's bestseller with Vivaldi's Seasons. The other was by Mincho Minchev with Mozart's concerts. My favorite was a record by Mila Georgieva with violin pieces. During our travels in Bulgaria with my parents in the car always sounded Italian pop music from their time. Over the years, I discovered other styles. I have albums by Metallica, Manowar, Koyan, Marilyn Manson, Nightwish, Aerosmith, Eric Clapton, Shade, Elton John, George Michael and many more.

IN WHICH MUSICAL STYLE ARE YOU MOST ADVANCED?
As a classical musician, of course, I am the best at performing classical music. I also like to play Argentine tango, swing, blues. I accept each new challenge with curiosity and interest because I like to experiment with my tool.

WHAT DOES MUSIC GIVE YOU?
Music gives me satisfaction and comfort. She immerses me in her world, which is infinitely interesting.

WHY DID YOU DECIDE TO START TEACHING MUSIC?
I started looking for something new. This is my favorite activity right now. To see people in front of me master such a difficult tool and do it with enthusiasm. It's a pleasure. I help them cope and we achieve good results. I try to encourage people and ignite them even more, because without fire in my heart it is difficult to keep the interest in this tool so difficult to master. Despite everything, in the second or third lesson we already play songs and we are always "On the edge of possibilities". Nigel Kennedy says that if we don't strive to be there all the time, there's no point in playing the violin at all. I believe in this.

WHAT IS THE MOST IMPORTANT THING TO LEARN IN MUSIC?
The most important thing in music, in my opinion, is to have a sense. About the wind, nature, the elements, the freezing ice to the north, the warm waves of the sea, the beauty, the silence. Being able to convey to the listener feelings and emotions through the instrument you play is the most important thing.

WHAT IS ROCKSCHOOL FOR YOU?
RockSchool for me is a favorite place full of friends and positive people in love with music.

WHICH MUSIC IS VALUABLE TO YOU?
The music that excites is valuable.

WHAT IS THE MOST EXTRAVAGANT THING YOU HAVE LISTENED LATELY?
I think it's that song - "Because last night I made a cake."

DO YOU HAVE A DREAM RELATED TO MUSIC?
I have a lot of desires related to music, but I try to fulfill each of them. Most are related to playing a piece.