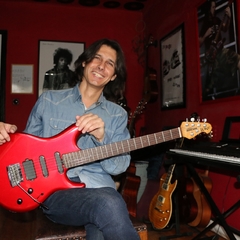 How long have you been involved in music and how did you decide to start?

From 9 years old. Thanks to my mother. She enrolled me in a classical guitar course. At 14, some of my older friends already had electric guitars, and the transition from one instrument to another became quite smooth. They showed me all kinds of riffs, and I helped them with the notes.

Which song do you remember most vividly from your childhood?

Who are the artists you have listened to and played the most?

Definitely Joe Satriani and Steve Vai. I remember breaking the rewind button on my tape recorder trying to hear exactly what they were playing. Of course, they were later joined by names like Jeff Beck, John Mclaughlin, Greg Howe, Richie Kotzen, Paul Gilbert, Dimebag Darrell (Pantera), Marty Friedman (Megadeth), Alex Skolnick (Testament), Frank Gambale and the pet. me for all time: Allan Holdsworth

In which musical style are you most advanced?

I'm a rock guitarist, but as a friend of mine jokes, over the years I've had to play everything from Bruno Mars to Death, including a few jazz standards.

What does music give you?

It's like knowing a secret language. You understand things that others do not suspect.

Why did you decide to start teaching music?

When I started playing the guitar, I dreamed of being able to see where and how a certain passage was played on the fingerboard, and I had to guess for myself, which took a long time. So now if I can help with something…

What is the most important thing to learn in music?

Everything you can learn about it is important. This will make you better.

What is RockSchool for you?

A very well thought out project. A place for people who want to learn and people who really want to teach.

Which music is valuable to you?

Every music made with soul and heart is valuable.

I've seen more. Haha. Currently, performers rely more on extravagant looks than on such music. Otherwise, I highly recommend the volumes "Passion and Warfare" by Steve Vai, "Introspection" by Greg Howe, "Heavy Machinery" by Allan Holdsworth or "Human" by Death.

Do you have a dream related to music?

Rather, it is a goal. I'm trying to be a better musician than yesterday.